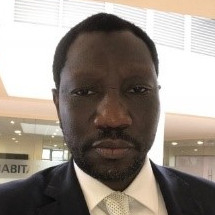 Since January 2020 Oumar Sylla has been acting as Director for the Regional Office for Africa in the United Nations Human Settlements Programme (UN Habitat). Before this, he was Branch Coordinator, Urban Legislation, Land and Governance in UN Habitat and, from September 2015, Head of UN Habitat’s Land and GLTN Unit. Prior to joining the Land and GLTN Unit, Oumar served as a Senior Advisor in UN Habitat’s Regional Office for Africa and focal point to support urban policies development and sustainable urbanization in francophone countries. From 2009 to 2014, he was Chief Technical Advisor for UN Habitat’s Land Programme in DR Congo and he also has experience with the European Union framework, which he gained as a Land Policy Advisor in South Sudan and Burkina Faso (2006-2008). From 1999 to 2005 he was a Research Fellow in the Laboratory of Legal Anthropology in Paris 1 Sorbonne, mainly working on land and decentralization policies in West Africa. In Senegal, he operated as a junior researcher within the ILRI/ ISRA institutional cooperation framework (1998-1999) dealing with land and natural resources.