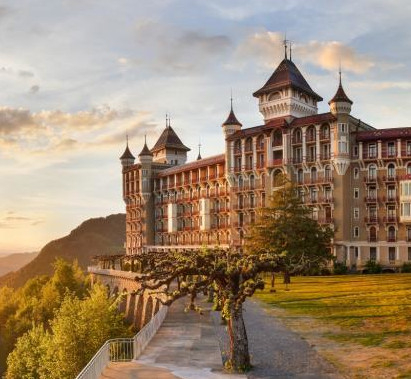 Since the beginning of the war in Ukraine on 24 February 2022, millions of displaced people have left their homes in search of a safe space. As the European Centre of Initiatives of Change, the Foundation feels compelled to reach out and help those in need. The Caux Refuge is located in the Villa Maria, right next to the Caux Palace. It currently offers space for up to 30 people and we work closely with local authorities with respect to the law. 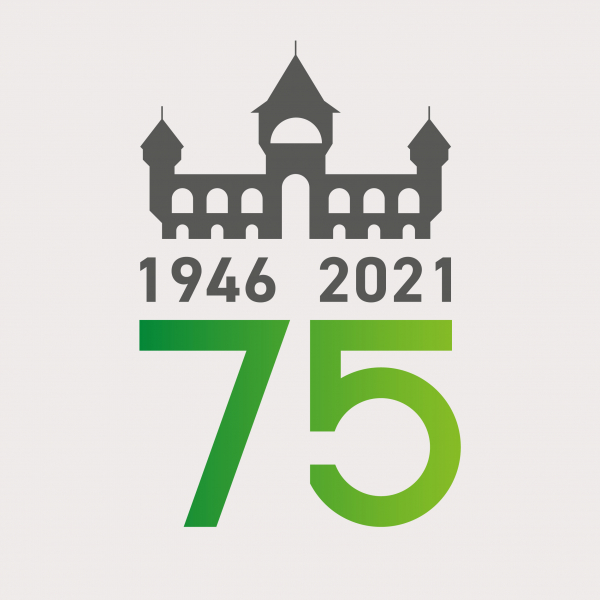 75 Years of Encounters in Caux

2021 marked the 75th anniversary of Caux as the European conference centre of the worldwide movement of Initiatives of Change (then called Moral Re-Armament). Throughout the year, under the theme of 75 Years of Encounters, we celebrated, took stock and looked towards the future.

As a response to the Covid-19 pandemic, the Caux Forum went online. People from all over the world were so able to participate at conferences, arts events and talks which - under normal circumstances - would have taken place in Caux.

The international Caux conferences are rebranded and renamed Caux Forum with the aim of developing human potential for global change. 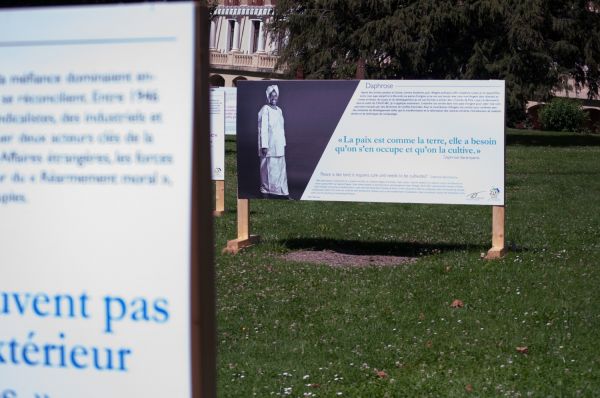 The CAUX-IofC Foundation celebrates its 70th anniversary with a summer-long exhibition first in Montreux and then on the terrace of the Caux Palace. 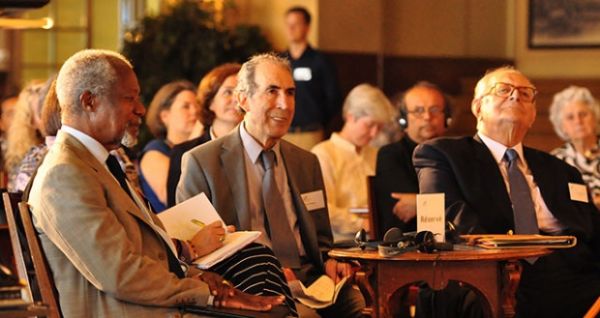 For five years, the Caux Forum for Human Security brings together politicians, diplomats, academics, journalists, fieldworkers, business people and artists to explore the root sources of human security. Initiated and chaired by Ambassador Mohamed Sahnoun, the Forum aims to build a worldwide coalition of conscience which recognizes that building trust at all levels is key to achieving meaningful change.

The FDFA supports the Caux Forum for Human Security since 2018 as a continuation of the operational collaboration in Burundi which began in 2005.

Mohammed Sahnoun, Algerian diplomat and former special advisor to the Secretary General of the United Nations, takes over as the President of IofC International. Kofi Annan visits the Caux Conferences for the first time.

With the approach of the new millennium, the words 'moral re-armament' no longer hold the same resonance as they did in 1938. In 2001 the new name, Initiatives of Change (IofC), is announced to the world's media by the Caux Foundation’s President, Dr Cornelio Sommaruga (former President of the international Red Cross), and Professor Rajmohan Gandhi, grandson of the Mahatma. Dr Sommaruga is elected first President of the International Association of IofC International.

On request of some Burundians, IofC supports their action for peace and reconciliation in Burundi and the African Great Lakes region, in partnership with the FDFA (Swiss foreign ministry). Meetings between government officials and representatives of opposition and rebel groups take place alternately in Caux and on the ground.

The Queen of the New Zealand Maoris comes to Caux with Joan Bolger, the wife of the Prime Minister.

The former Caux-Palace is classified as ‘a building of national importance’.

A tree is planted on the terrace in memory of the Jews who found shelter in Caux during World War II.

50 years of the Caux Conferences

The Caux Conferences mark their 50th anniversary with a three-day event entitled ‘Forging the Future – preparing for the 21st century’. Among those who attend are the Dalai Lama, Cardinal Franz König, former Archbishop of Vienna, Rev Heinrich Rusterholz, President of the Federation of Swiss Protestant Churches, and Rabbi Dr Marc Gopin, Professor of Religion and Conflict Resolution at George Mason University, Washington DC.

The Caux Round Table launches its Principles for Business, a comprehensive set of ethical norms for businesses operating internationally or across multiple cultures. 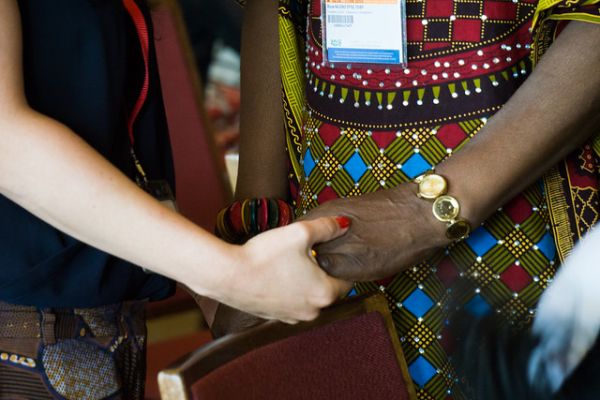 Launch of Creators of Peace in Caux

The Creators of Peace (CoP) women's initiative is launched in 1991 in Caux by Anna Abdallah Msekwa, a respected Tanzanian politician and women’s leader. Over the years, CoP expands to become a global network, working to empower women as peace-builders through Creators of Peace Circles, workshops and international conferences.

The collapse of Communism triggers new needs and opportunities for the rebuilding of democracy in the post-Soviet world. The first large groups from Central and Eastern Europe come to Caux after the fall of the Berlin Wall. Other initiatives that develop throughout the 90s are Hope in the Cities, launched, following a conference in Caux, to bridge the racial divide in the US; Clean Election Campaigns in Taiwan, Brazil and Kenya; and a continuing concern for the creation of the moral and spiritual infrastructure for development in both rich and poorer nations. 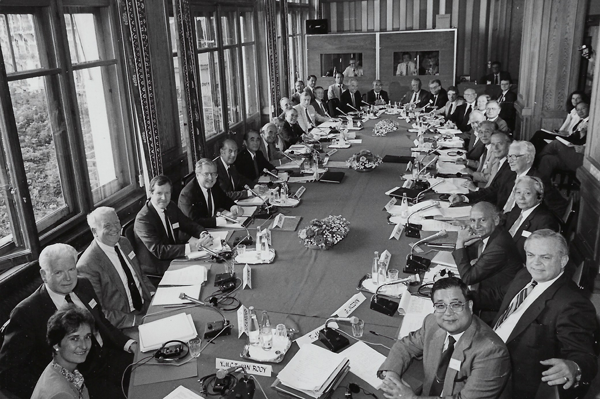 Business executives from Japan, the USA and Europe, among them Frederick Phillips, former President of Philips Electronics, and Olivier Giscard d’Estaing, former Vice-Chairman of INSEAD, meet for the first time in Caux and found the Caux Round Table as a means of reducing escalating trade tensions.

With reconciliation a primary need in many parts of the world, much of MRA's work concentrates on supporting peace-making initiatives in Africa and Asia. Between 1977 and 1980, Caux contributes towards work for peace and independence in former Rhodesia, now Zimbabwe. 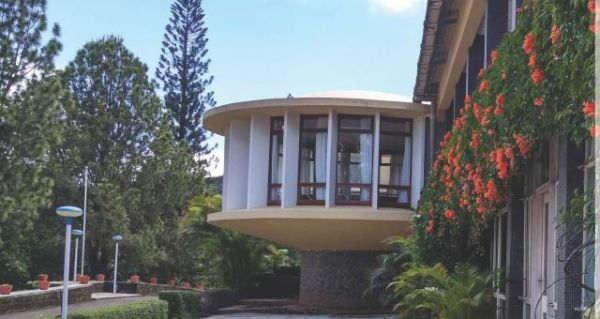 1968 sees the opening of Asia Plateau – a major international centre for the training of people from industry, education and other national sectors in Panchgani, India.

Following violent tension between the German speaking-minority and the Italian administration in the province of South Tyrol, a delegation of politicians from both sides hold meetings during the 1968 Caux Conferences. Their encounters contribute to initial steps towards settling the dispute, which is finally resolved in 1992. 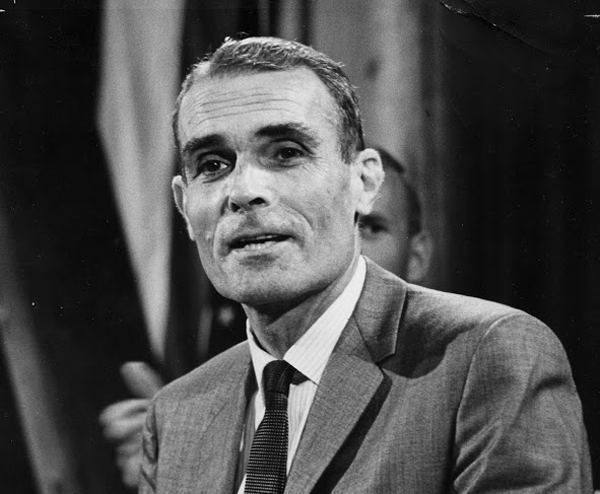 When Buchman dies in 1961, the former British political journalist Peter Howard assumes the leadership of MRA, but four years later he too dies. Without a clearly identified leadership to ensure cohesion, unresolved differences among those taking responsibility begin to surface. This leads to splits and spin-offs in the US and some other countries. After a period of uncertainty and dissension, trust is slowly re-established with valuable lessons learned. 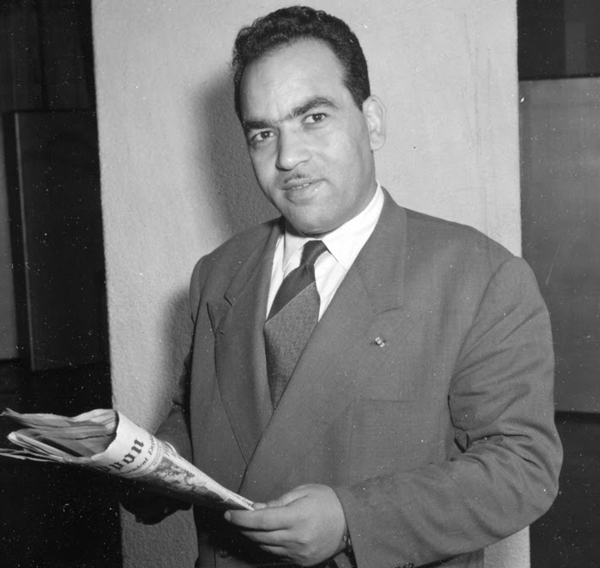 In 1953, a young Tunisian nationalist, Mohamed Masmoudi comes to Caux and encounters many French individuals which frees his from his hatred of the French. A few days later, he meets Jean Basdevant, responsible for Tunisian affairs at the French foreign ministry for a meal at the MRA centre in Paris. At a tense time between France and its colony, they develop an unlikely relationship of trust. Both men later become key players in the negotiations which lead to Tunisian independence in 1956. 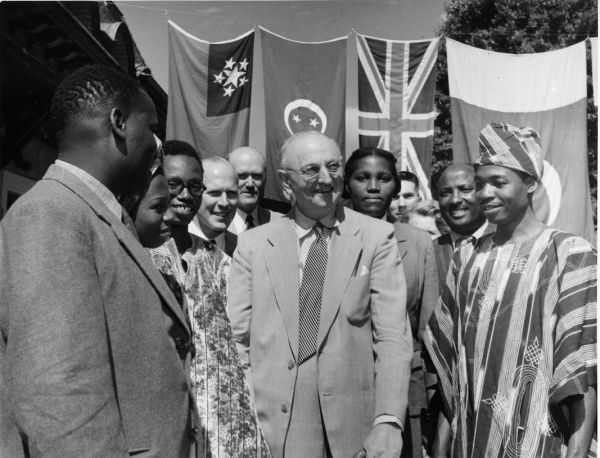 By the 1950s, casts of plays presenting MRA's ideas are travelling all over the world. Centres are established in Latin America, India, Japan and several countries in Africa. Delegations from North African and West African countries moving towards independence come to Caux. 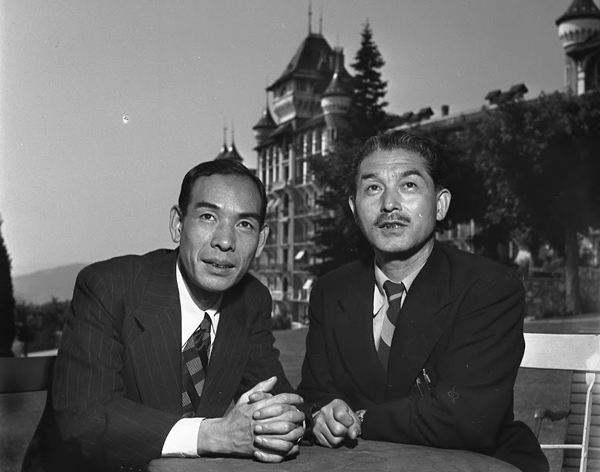 In June 1950 a delegation of 60 Japanese, among them politicians, trade unionists and industrialists, embark from Caux on a tour of Europe and America to apologize for Japan’s mistakes during World War II. 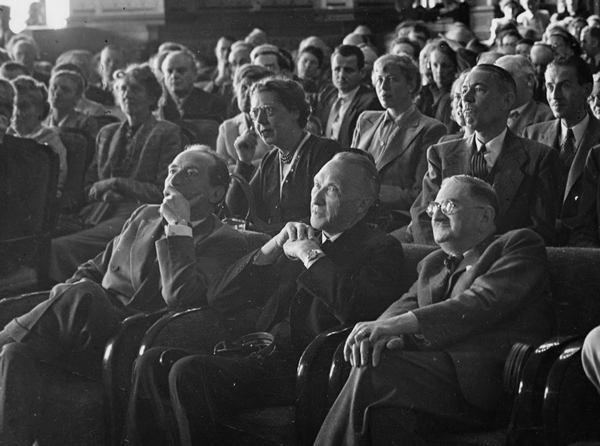 At a time when any contact between the former adversaries is extremely difficult, Buchman and his colleagues invite Germans to take part in the Caux conferences. Over the next four years growing numbers of Germans and French come to Caux and their encounters become the basis of a massive development in reconciliation. Buchman is later decorated by both the German and French governments for his contribution to European reconciliation. In 1951, German Chancellor Konrad Adenauer writes to Buchman: ‘Moral Re-Armament has played an invisible but effective part in bridging differences of opinion between negotiating parties, and has kept before them the objective of peaceful agreement in the search for the common good which is the true purpose of human life.’

An international conference centre in Caux

On behalf of Moral-Re-Armament, Philippe Mottu and Robert Hahnloser sign the contract to buy the run-down former Caux-Palace Hotel. Hundreds of Swiss citizens give money, time and work to make this purchase possible and to transform the building into an international conference centre. The first conferences take place that summer and the Caux Foundation is established in the autumn. 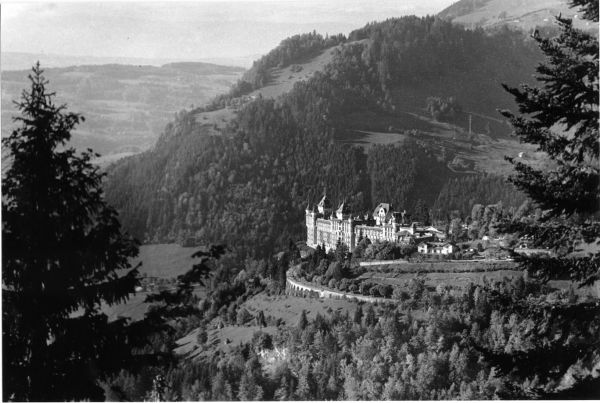 ‘Caux is the place’

In the thick of the war, a young Swiss diplomat, Philippe Mottu, writes, ‘If Switzerland is spared by the war, our task will be to make available for Moral Re-armament a place where Europeans, torn apart by hatred, suffering and resentment, can come together. Caux is the place.’ 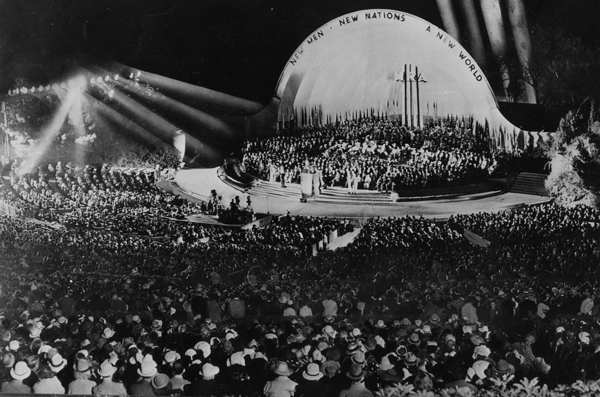 As European nations re-arm for war, Buchman calls for 'moral and spiritual re-armament' as the way to build a 'hate-free, fear-free, greed-free world'. Following World War II, Moral Re-Armament (MRA), as it becomes known, launches a programme of moral and spiritual reconstruction to foster change in private and public life based on a change in motivation and character.

Buchman encourages people to seek God's wisdom in regular times of silence and reflection and to adopt universal moral values as a benchmark for their lives. He describes Moral Re-Armament as the good road upon which people of all faiths and none can unite.

Through the 1930s, Buchman's ideas spread into many sectors and onto other continents. Alcoholics Anonymous is established in 1935 as a direct result of the liberating experiences which some people find through their contact with the Oxford Group. 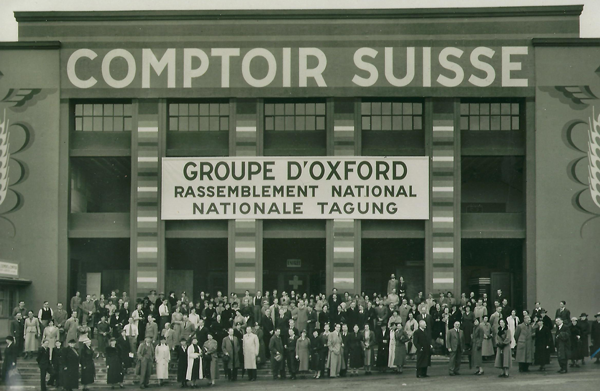 Buchman's experience in 1908 inspires his work in American universities and in Asia. He becomes convinced that personal change is possible and can be a catalyst for change in society. His ideas take root at Oxford and his work becomes known as the 'Oxford Group'. 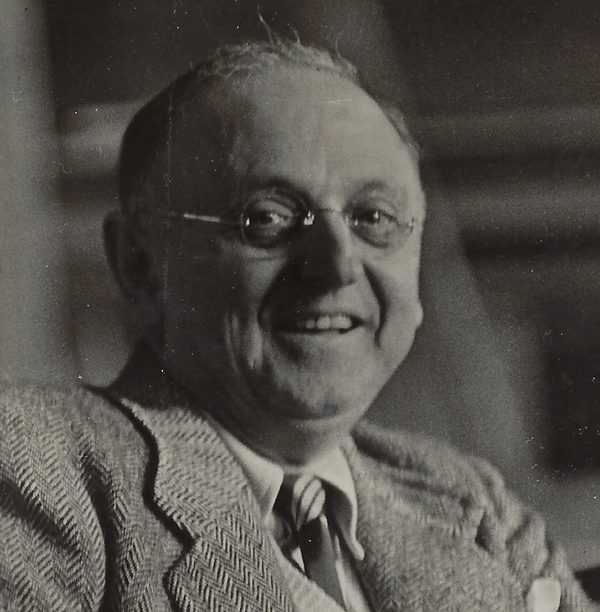 Frank Buchman (1878-1961), the American Lutheran minister of Swiss descent who started Initiatives of Change, has a spiritual experience which releases him from bitterness towards people who he feels have wronged him. This experience alters the course of his life.

If you are looking for more information on our history: