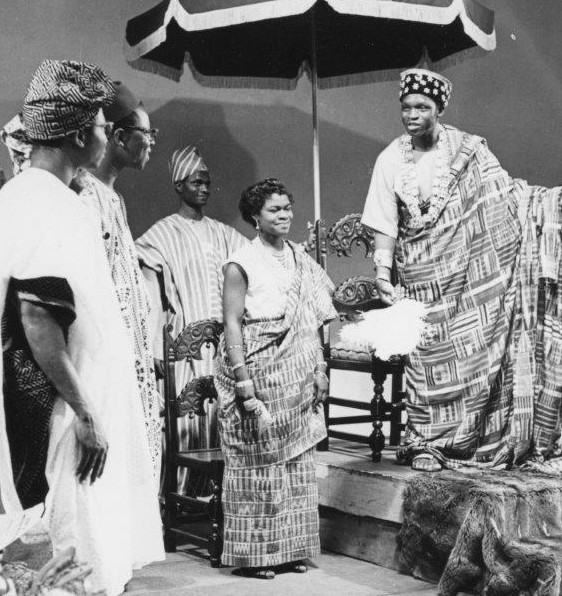 After a week at the Caux conference centre in July 1955, the African delegation was ready to move on. They told their hosts, ‘We’ve enjoyed Caux. Now will you please arrange for us to see more of Europe?’

The next morning, 28 July, the founder of Initiatives of Change (then called Moral Re-Armament), Frank Buchman, called the group together. They came from several countries, most of them struggling for independence, and included politicians, trade union leaders, business people and students. ‘I spent much of last night in Africa in my thoughts,’ Buchman told them. ‘Africa is not meant to be torn apart between East and West, but to speak to both East and West with an answer. I think that it may come in the form of a play. Do you think you could write a play?’

Africa is not meant to be torn apart.

‘Thirty of us Africans met after lunch,’ remembered Ifoghale Amata, a young Nigerian graduate. ‘Soon we started quarrelling about what should go into the play. Then someone called for a time of quiet.’ When they pooled their thoughts, they found they had the skeleton of a plot.

Manasseh Moerane, a South African teachers’ leader, Abay-Ifaa Karbo from Kenya and Amata volunteered to write an act each. Next morning they read their drafts to the rest of the group and by five o’clock they told Buchman they had a finished play.

A week later, on 5 August, the Africans presented the play in the Caux theatre, with Amata and Moerane playing barnstorming roles as the leaders of two political factions in an African nation on the verge of independence.

The play shows change of heart bringing unity between people divided by ideology, personality and tribe. This disarms the prejudices of the arrogant colonial governor, and eases the country’s path to freedom.

We were catapulted into history.

Buchman promptly announced that the play, which they called Freedom, would be presented in London the next week. ‘We were catapulted into history,’ said Moerane. ‘Within a few months Freedom was seen by 30,000 Europeans in London, Paris, Bonn, Berne, Geneva, Helsinki, Copenhagen, Stockholm, Oslo and Milan. Demand was so great that we decided to make a film.’

Filming took place in Nigeria in 1956. Over 2,000 people contributed money. Some of the actors and crew gave up their jobs to take part, without pay. The actors came from all over Africa, apart from a retired British colonial administrator, Lionel Jardine, who took the role of the governor.

The cameramen were both from Scandianvia: the Swede Rikhard Tegström, who had worked for Disney, and Aimo Jäderholm from Finland, who was contracted to Suomi Filmi, Finland’s biggest film company. One scene involved a canoe race, with 10,000 extras.

‘Much of the filming had to be done at night because of the heat and noise,’ wrote director’s assistant, Loël Ferreira. ‘Film was kept in a cold room in a butcher shop to prevent expansion in the heat and was flown back to London for processing.’

Freedom is thought to have been the first full-length feature film written and acted by Africans and filmed in Africa. It was dubbed into many languages and shown all over the world. In Kenya, alone, a million people saw it in the run-up to independence in 1963.

After the apology, what?

Wherever Freedom was seen, it impacted people’s lives, with lasting consequences. Robert Webb, a young journalist in Jackson, Mississippi, saw it at a conference in 1957. He wrote later that it drove ‘a stake into my racist heart’.

After the film he apologized to ‘the first black person I saw’ who happened to be African. ‘I will never forget his response: “After the apology, what?” I have been trying to answer that question ever since.’

Webb went on to a distinguished career on the Cincinatti Enquirer. When he died in 2018, his obituary spoke of his ‘vision for journalism as a force that could help heal the deepest hurts and bridge the most bitter divides’.

Watch a video on the film opening of Freedom in Los Angeles 1961.