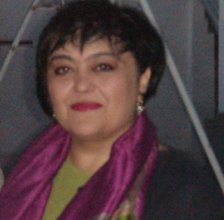 Being the Vice President of the International Federation for Human Rights (FIDH) and the Executive Director of Armanshahr Foundation founded in 1996, Guissou Jahangiri is a human/women’s rights pioneer and a cultural activist. She worked for 15 years as a journalist for the French Courrier International covering Iran, Afghanistan & Central Asia. Ms. Jahangiri spent 5 years in war-torn Tajikistan as the Human Rights Watch researcher and acting head of the UN Office for Co-ordination of Humanitarian Affairs. In 2006, she founded a unique Human Rights (HR) publishing house (250,000 books from Afghanistan and the region). She launched the International Simorgh Peace Prize in 2009 awarding outstanding HR and civic cultural activists in the heart of Asia. In 2013, Ms. Jahangiri cofounded the first ever Afghanistan International Women’s film Festival-Herat serving yearly as a regional and international platform.