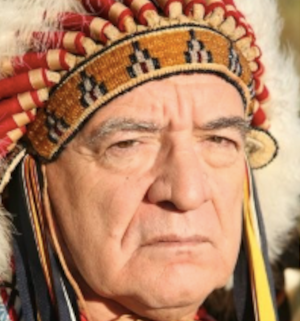 Hereditary Chief Phil Lane Jr. is an enrolled member of the Ihanktonwan Dakota and Chickasaw Nations and is an internationally recognized leader in human, community and economic development. During the past 54 years, Chief Lane has worked with Indigenous Peoples from the Americas, Micronesia, South East Asia, China, India, Hawaii, and Africa. He served 16 years as an Associate Professor at the Faculty of Education at the University of Lethbridge, Alberta, Canada (1980-1996). In 1982, Chief Lane co-founded the Four Worlds International Institute (FWII) with Indigenous Elders and Spiritual Leaders. As well, Phil is Chairman of Four Directions International and Compassion Games International. Chief Lane has been the recipient of multiple awards and recognition. He was the first Indigenous person to win the prestigious Windstar Award, presented annually on behalf of the late John Denver and the Windstar Foundation. In 2000, he received the Year 2000 Award for Freedom and Human Rights awarded by the Swiss Foundation. Other winners of this award include Nobel Prize winner Wangari Maathai, the Dalai Lama, Lord Yehudi Menuhin, Jacques-Yves Cousteau, and Yevgeni Velikhov, Vice President, Soviet Academy of Sciences.