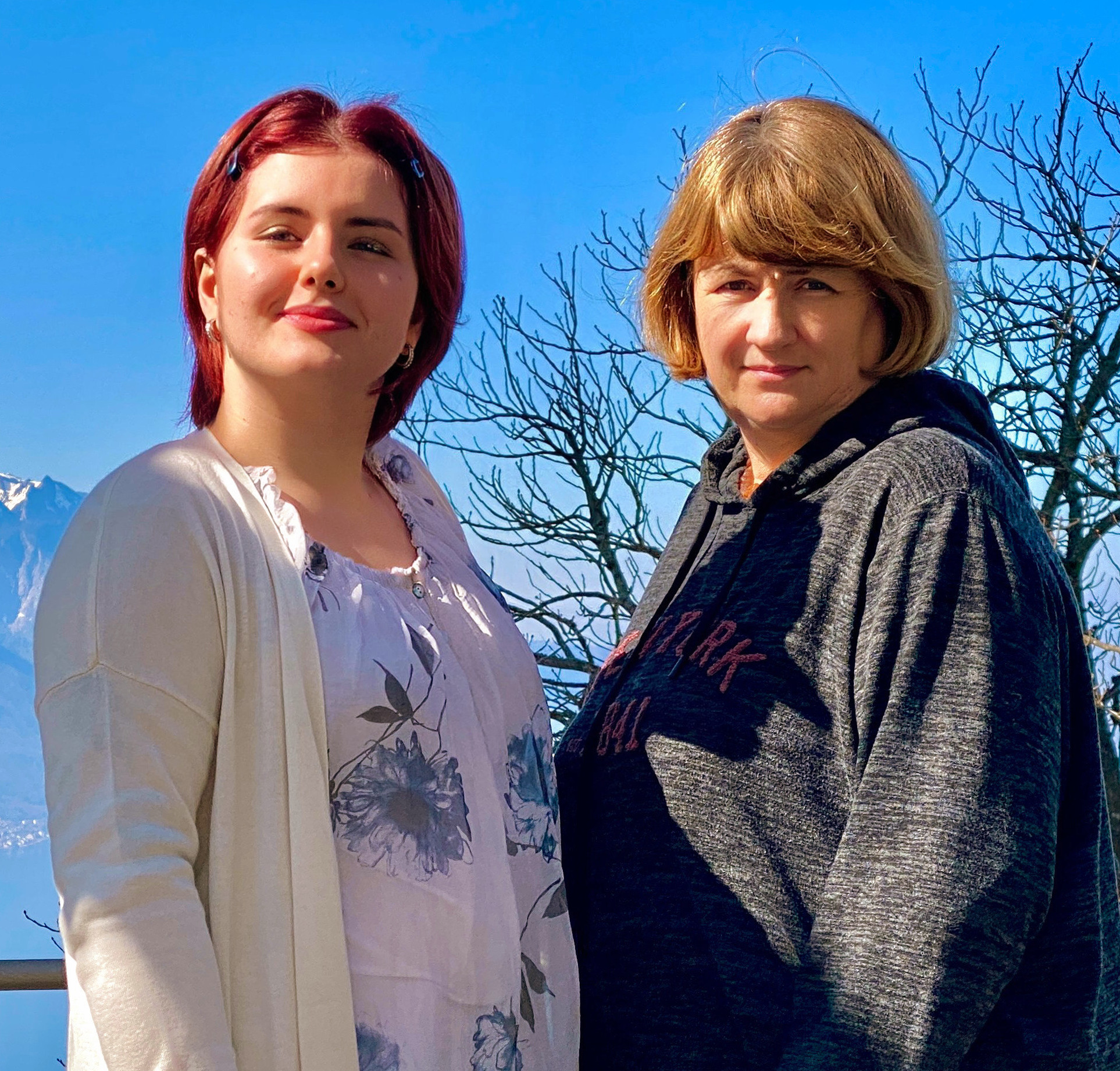 This article is the first in a series of interviews with people affected by the war in Ukraine who have found temporary shelter at the Caux Conference and Seminar Centre in Switzerland.

On the morning of 24 February, Alina Shymanska and her mother Liudmyla woke up to the news that the Russian army had bombed a military airport in her native city Zhytomyr, Ukraine, just 10 kilometers from their home.

That morning divided the lives of many Ukrainians into “before” and “after”. The horrifying sound of the air-raid siren became an omen for all the pain and suffering that would follow and overnight, Alina's yearly bucket list outlining her dreams, aspirations, and goals, became utterly irrelevant.

Alina is the perfect example of a new generation of young Ukrainians who have known Ukraine only as an independent sovereign state. Before the war broke out, Alina had had big plans for her life in Ukraine. A member of the Professional Government Association of Ukraine and a youth delegate at the United Network of Young Peacebuilders, the World Forum for Democracy, the Yalta European Strategy Forum and at UNESCO, she was actively committed to many causes and had been dreaming of a brighter future for her country, working relentlessly to make this dream come true.

Alina’s involvement in community-work in Ukraine ranged from helping children suffering from bullying, to regularly donating her old clothes to those in need.

Her convictions as a young leader led her to become a Young Ambassador at the Caux conferences in 2018 and she took part in the Caux Scholars Program and the Asia Plateau Initiative in 2019. Her participation in different IofC events shaped her future work and motivated her to put even more effort into issues she cared about.

Now Alina and her mother Liudmyla have found a safe place in Caux to decompress and think about the next steps.

Tell us a little bit about yourself. What were the causes close to your heart back in Ukraine?

Alina - Before leaving Ukraine I worked as a project manager at the IT Academy in Zhytomyr which provides high-quality education in a rapidly developing IT sphere. I loved it there.

Another cause that is close to my heart was organizing a group of volunteers to form an NGO called “Open Up Initiative”, helping talented and creative kids deal with bullying, injustice, and hate speech at school. I was bullied myself when I was a student and this helped me understand the pain and suffering such kids go through. That’s how this initiative was born. We listened to them, supported their ideas and aspirations, helped them open up and took them to conferences, forums, and educational camps all over Ukraine. It was a positive change for them from their negative experience at school and showed them new ways and opportunities.

You stayed in Zhytomyr for a few days after the war started. What was the tipping point when you realized that you and your mother had to leave and look for a safe place to stay?

Alina – On 27 February we were still in Zhytomyr. It was the third day of the war and the Russian army dropped six bombs on the military airport 10 kilometers from where I lived. My mom initially refused to leave. I cried and asked her to go to the railway station with me. I knew I couldn't leave her in such a danger.

Liudmyla, so initially you were planning to stay at home and continue to work?

Liudmyla - Initially I didn’t want to go. I told my daughter that I would just say goodbye at the railway station and stay behind. I continued to work in a shop in our city during those first two days of the war and my plan was to continue doing so as long as possible. A lot of shops were already closed so I felt I couldn't just leave.

Alina - I think at that time many people did not believe the war would last so long. My mom thought about her house and her garden, and didn’t want to leave because there was where she had some stability, work, and property. She wondered who would look after us once we crossed the border. Back then, nobody knew if we would receive help, especially not with as much generosity and compassion as we see and feel now in Caux.

How did you convince your mother to go with you in the end?

Alina - When I decided to leave I insisted my mother should take her ID because we needed to go through several block posts before we could reach the railway station. My initial plan was to travel to Lviv, in Western Ukraine. My train was canceled because of the bombing, but there was a possibility of taking another train coming from Kramatorsk in the East. We later found out that it was a special evacuation train for people from Kramatorsk. We ran towards the train and I begged them to let us get on board. By then, my mother had decided to travel with me to the border and then go back home. So right until the end she still didn’t think she would leave.

Liudmyla - In fact, I still want to go back to my house and my normal life as soon as possible.

How long did it take you to arrive in Switzerland?

Alina - It took us four days. We crossed the border to the Slovak Republic. People there helped us a lot, and treated us with generosity and kindness. They shared food and gave us a place to sleep. Up to that point, we almost had no sleep at all. I was so grateful to be able to sleep. On 2 March, we finally crossed the Swiss border.

What happened when you first arrived in Switzerland?

Alina - When arriving at Geneva airport, we were welcomed by a police officer whom we asked for help because we had no place to stay. We were sent to a refugee camp and stayed there, together with many other refugees from all over the world. Ukrainians were new to Switzerland, so both officials and volunteers were a little bit confused and overwhelmed, considering the number of people coming to Switzerland. It was a tough experience. We sat on a bench for hours, waiting for someone to come back with our documents. Then they gave us beds in a room we shared with ten other people from Afghanistan, Bosnia and Herzegovina and Somalia, who were also hoping to get asylum. From there, they soon sent us to another camp, close to the border with Austria and Liechtenstein where we spent another five or six days. It was quite a journey before we managed to get to Caux.

Now that you have already been in Caux for several days, what are your first impressions? Have you already met people from IofC and the village of Caux?

Alina – Yes, during my first days here I met most of the people from the village as they visited to greet us. I am so thankful to all the members of the wonderful IofC and Caux community, who brought all the essentials - healthcare items, medicine, clothes and food, all with great generosity.

Liudmyla - When we left our home town we weren't able to withdraw any money. There was no cash in ATMs and people didn't get their salaries. We had to leave with almost nothing. I carried with me with just one bag, while Alina had one piece of small luggage with her. Seeing all these generous donations was very moving.

Now that you have found a safe space to stay, how do you feel emotionally?

Alina - I finally feel safer, but very unsure of the future. Therefore I’m still not feeling 100% safe. This is probably also because I am in touch with family and friends who are still in Ukraine. Being in so close contact I feel I am with them, even though we are now living through this terrible experience from a place of comfort. Back in Ukraine people are often lacking food and essentials so I am feeling guilty, too. I often hear how important self-care is, but it is hard to care for yourself when you know that people are dying, that kids are dying.

Is the rest of your family in safety? How are they?

Alina - My father, brother and many friends are still in Ukraine. Sadly, many members of my family are now scattered all over Europe, except for my dad and brother, who are protecting our land in the military. In my opinion our military doesn't get enough support. I am wondering how the humanitarian convoys will reach those in need, now that the bridge from Chernihiv to Kyiv was destroyed, When I think how difficult it is to evacuate people from certain areas my heart breaks.

Where do you find strength and hope to move forward in such difficult times?

Alina - In prayer. It helps me a lot when I pray, it gives me some hope and comfort. It is very important to be thankful for the gift of life, and to see the little things that matter, like breathing, being able to see, to walk, touching the earth with your feet, listening to the birds in the morning. All these small things matter a lot. In such moments of prayer and by appreciating the little things in life, I believe that light will conquer darkness! 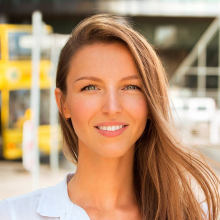 Anastasia Slyvinska is a journalist from Kyiv, Ukraine. She has worked as a TV host, a foreign reporter and a manager for media outlets in Ukraine and abroad. Having worked at both Ukrainian and Canadian Parliaments she combines her media expertise with her political sciences background, holding a MA in Political Science. Anastasia has been part of the IofC community since 2014 when she first participated at the conference Just Governance for Human Security. She is currently staying in Caux.

Initiatives of Change Switzerland has always followed its mission to provide a safe space for people in need. The Caux Refuge project will cost an estimated CHF 27,000/month. For now, 18 people affected by the war in Ukraine have already been welcomed to Caux these last days and more will follow soon. You can support the Caux Refuge project here: 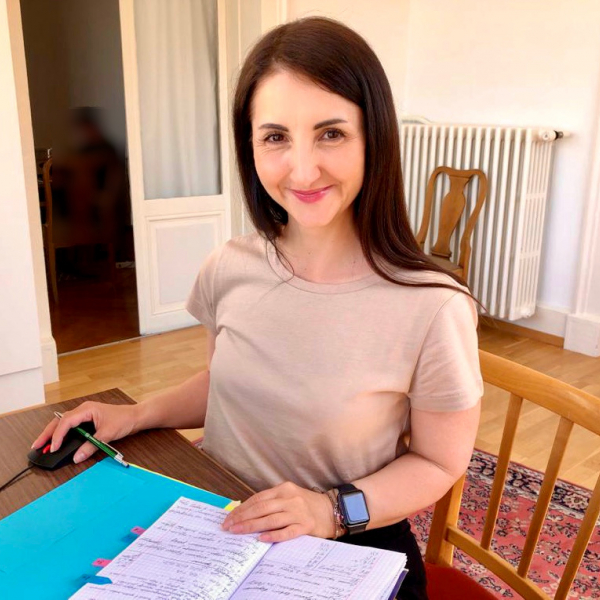 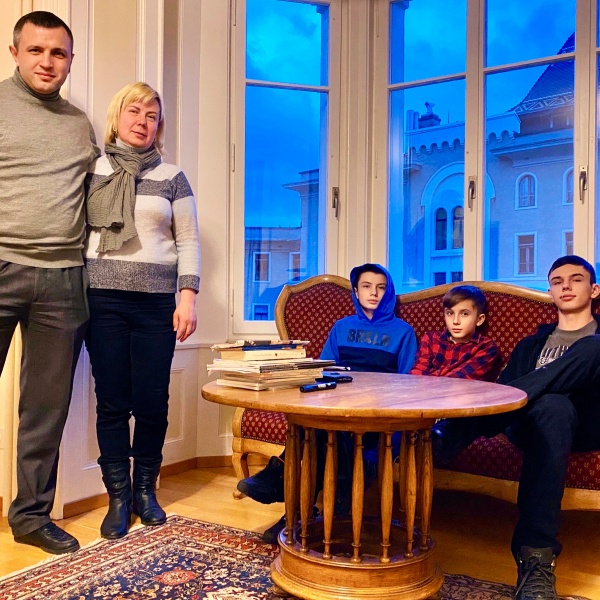 For more than a week Anatolii, Tetiana, and their three sons lived without electricity, heating or water in freezing temperatures in the village of Horenka near Kyiv. After a long journey through Ukra... 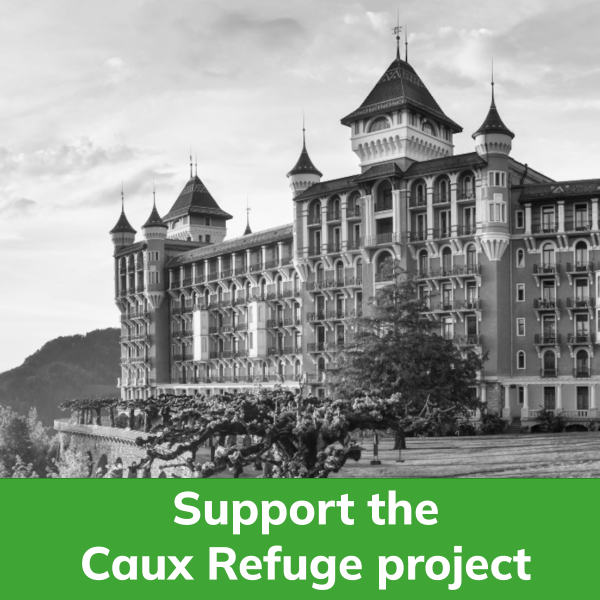