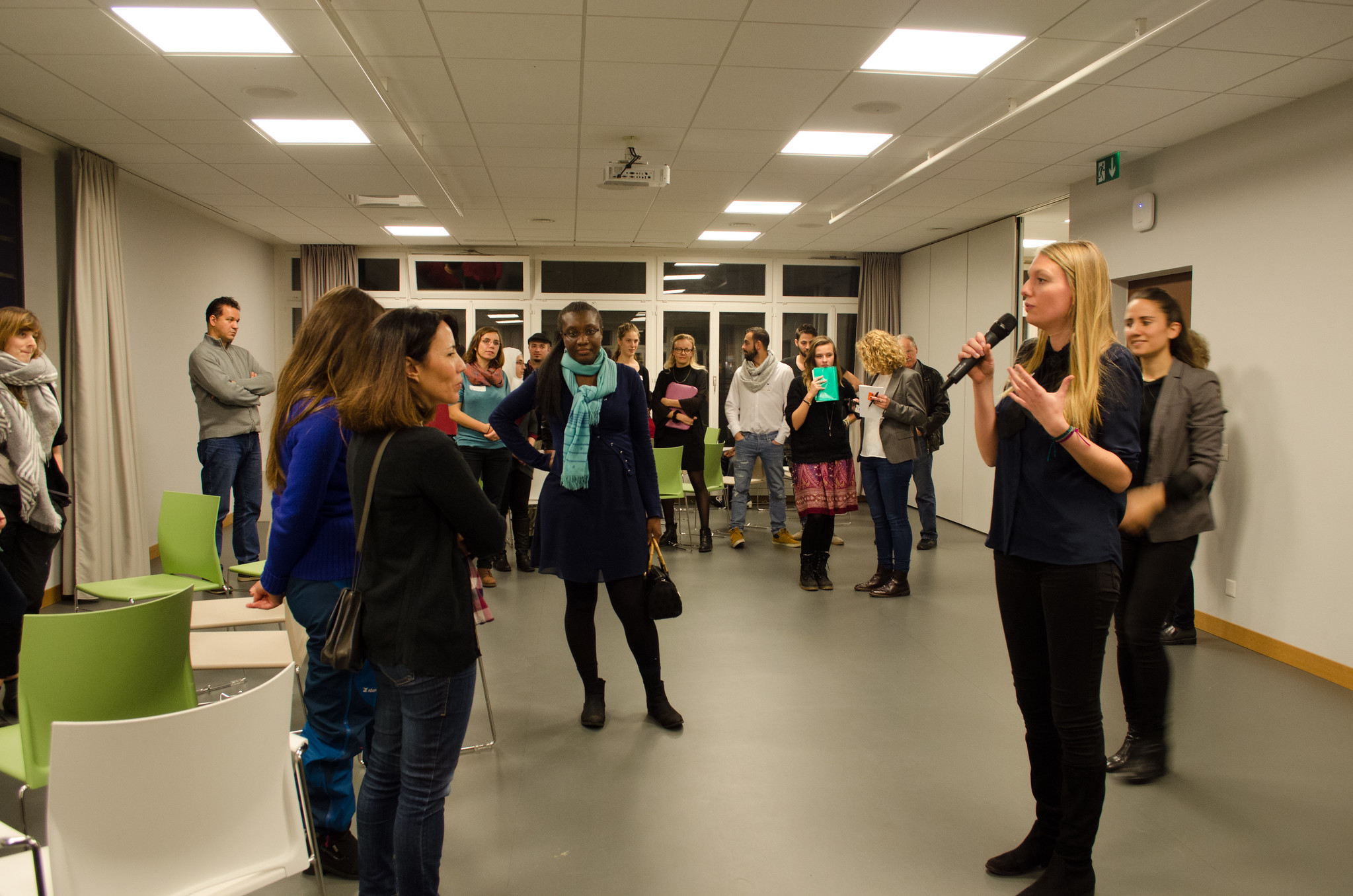 Around 40 people gathered in the UN library on 4 May 2017 to participate in the latest edition of CAUX-Initiatives of Change Foundation’s (CAUX-IofC) human library on ‘Youth Breaking Barriers of Exclusion’. This was CAUX-IofC’s third collaboration with the UN library as part of its Enriching Encounters series.

“Give young leaders a voice”

Barbara Hintermann, Secretary General of CAUX-IofC reminded the audience of the importance to involve young leaders and give them a voice as “the young generation is the world’s future and strongest resource”. CAUX-IofC aimed to do just that by providing a space for young leaders to tell the inspiring stories of how they turned their concerns and ideas into constructive action.

Readers were invited to choose from a range of young human books with stories of self-initiated projects aiming to build bridges within their communities and take steps towards inclusive change.

Salome Schmid and Flore Portmann were aiming to break barriers of exclusion in Switzerland when they co-founded La Red, a house in Fribourg which aims to enhance contact between people of different cultural backgrounds and to foster exchanges at eye-level. When the young founders of La Red had the idea to create this intercultural space, they didn’t know each other at first. This proved to be a real strength, as it allowed them to expand their network and reach out to a diverse community. The house and the activities on offer are now entirely self-managed by young volunteers.

Another successful story of intercultural exchange is the one of Sprachcafé Basel, an organization which invites people to practice German for greater integration in a café in Basel. As a German teacher, co-founder Anita Ruggiero is convinced that speaking the language is the first step towards integration. Together with Jessica Eggeschwiler, they had the idea of creating an open space for language exchange and made it happen. Every week, the Sprachcafé welcomes newcomers, refugees, expats and locals in a laid-back atmosphere for meaningful exchanges, games or light conversation.

“I needed to understand why someone wanted to kill me, how someone who grew up similarly to me ended up being so different to me”

After surviving the 2011 terrorist attacks on Utøya island in Norway, Bjørn Ihler was determined to study and understand how perpetrator Anders Breivik became a terrorist. Often depicted in the media as a monster, the man Bjørn saw in court turned out to be “just another human being, not so different from myself”. This led him to realize that all extremists have their humanity and that for him to move on, he needed to “reconcile with the past and accept what had happened”. He now focuses on deconstructing the victimhood narrative, in which violent extremists believe their identity is threatened by others and feel this position of victimhood justifies violent action. To counter these extremist narratives, there is a need to empower people, value their humanity and “give them a sense of value, a positive identity teaching them means other than violence for their agenda’. Bjørn Ihler is now a member of the Kofi Annan Foundation’s Extremely Together, a group of ten young leaders active in preventing and countering violent extremism. He is also the co-founder of Omelas, a company using technology to challenge extremists.

Bjørn believes in storytelling as a tool to make a change. “The stories we believe in shape how we perceive the world, how we behave. By changing these stories, we can change lives.” Storytelling is central to CAUX-IofC’s approach and Bjørn Ihler will be sharing his story at the Official Opening of the Caux Forum on 30 June 2017, a public event exploring the links between inequalities and extremisms.

It all started when four young people concerned with the social economic integration of refugees in Geneva put their heads together and secured seed funding to implement their innovative project. Their idea: organize a reverse job fair, where refugees could share their skills and professional background with potential employers. A conference on the integration of refugees and an online job portal connecting refugees and employers soon followed. This is how THRIVE (Towards Holistic Refugee Integration through Valuable Engagement) was created.

The road wasn’t always easy, explained THRIVE coordinators Lisa Godde and Abdullatif Alabdullah, but with determination the young team overcame challenges such as building a network from scratch, securing funding and juggling internships and studies on the side. There are now 40 volunteers at THRIVE, 6 refugees have found job opportunities through the platform and the network is expanding.

The human books had plenty of tips for those who want to initiate a social project: Apply for funding as much as you can to secure financial support, be determined and committed, motivate each other, learn from your mistakes and be flexible as not everything will go according to your initial plan.

After sharing with each other the compelling stories of change they had just heard, participants summed up how they felt after the human library in one word: inspired. “I have learned about different ways to implement change and how important it is to make local connections”, said a participant. “It is up to the civil society to fill the gap. And this has inspired me to do just that”.

Missed the human library? Get inspired this summer at the Caux Forum! The Caux Forum is an inspirational platform aiming to develop the human potential for global change through its main events, training programmes and dialogues.