Alan Channer: A film-maker’s calling to 'land, lives and peace' 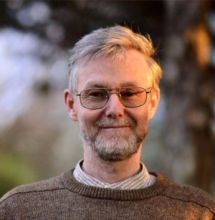 Alan Channer was working on a peace project in Baringo County, in the drylands of northern Kenya, when he received an invitation to a conference on ‘Restoring Earth’s Degraded Land’ in Caux, Switzerland in July 2011. The conference was the inspiration of Luc Gnacadja, then Executive Secretary of the United Nations Convention to Combat Desertification (UNCCD).

Northern Kenya was in the grip of a vicious cycle of environmental degradation, climate change, food insecurity, conflict and displacement, so the conference seemed relevant to Alan and his team at the United States Institute of Peace and in Initiatives of Change.

Alan and his colleagues returned to Kenya eager to test the idea that land restoration could help reduce conflict over dwindling resources.  IofC partnered with  two local community-building organizations to run a workshop on trust-building for sustainable development in Marigat, Baringo County, a hotspot of conflict between pastoralist communities.  It was facilitated by Kenyan IofC activists Joseph Karanja and Joseph Wainana and Alan.

The community leaders who attended the workshop generated an action plan to end cattle-rustling in the county. Alan made a short film, Restoring Land, Restoring Lives, which featured on the UNCDD video gallery. Shortly afterwards, the team of community leaders in Baringo were selected by the Independent Electoral and Boundaries Commission to serve as independent observers of the national elections in March 2013.

‘Without peace, we cannot have development in this county,’ the Deputy Governor of Baringo County, Mathew Tuitoek, said at a meeting with the IofC team. He went on to lead a delegation of five county officials to the Caux Dialogue on Land and Security in 2013, funded by the County Government.  From that point, the ripples of the Caux Dialogues on Land and Security began to spread across Kenya.  Meanwhile, Alan joined the Steering Group of the Initiatives for Land, Lives and Peace programme (ILLP).

The next year, Deputy Governor Gabriel Lagat, from neighbouring Elgeyo Marakwet County, brought a second team to Caux.  During his keynote address, he offered to host a Caux-style Dialogue on Land and Security in Kenya – and invited ILLP to co-organize it with him.

This invitation was a watershed for Alan.  During the time of early morning reflection at the Caux conference, he shared that he had been wondering whether he should spend a prolonged spell in Kenya with his family.  It seemed that Dr Lagat's vision was one that he should respond to, and that 'land, lives and peace' was a calling he should pursue, despite the financial uncertainty.

Joseph Karanja, Janet Jeruto, Stephen Kimaru, Simon Thuo, Meera Shah, Paul Keitany and Alan organized two Dialogues on Land and Security in Kenya – in 2015, in Baringo County, and in 2106, in Elgeyo Marakwet County. The events were supported by the governments of the two counties, the National Drought Management Authority, the National Land Commission, Coffey Kenya and several other institutions.  They had strong participation from the World Agroforestry Centre and World Vision and other agencies in Kenya. Highlights of the second Dialogue were broadcast on national television primetime news.

Alan’s own engagement with the synergies between land restoration and peace building deepened. He wrote a chapter on 'Trust-building and mobile pastoralism in Africa' in a book inspired by the Caux Dialogues, Land Restoration: Reclaiming Landscapes for a Sustainable Future, (Elsevier, 2016). He became a Programme Associate of the EverGreen Agriculture Partnership at the World Agroforestry Centre and produced two short videos with them, to encourage small holders to use nitrogen-fixing trees alongside their maize crops.  He began researching the potential of farmer-managed natural regeneration as a window for conflict transformation in conflict-prone drylands.

He made a film with UNDP in Chad to highlight the importance of building trust between pastoralists and farmers. He worked with Nigerian mediators, Imam Muhammad Ashafa and Pastor James Wuye, to conceive a project on transforming pastoralist-farmer conflict in Nigeria which won the United Nations Alliance of Civilizations /BMW Intercultural Innovation Award in 2017.  The aim was  to foster a win-win-win for the parties to a conflict and the environment.

Alan is pioneering in 2019 a 'Caux Land and Security Summer Academy' for mid-career professionals in the fields of peace and security and environmental restoration, in a partnership between ILLP and the Geneva Centre for Security Policy.

He looks back on all that has unfolded in the seven years since he received an email on the shores of Lake Baringo inviting him to ‘Restoring Earth’s Degraded Land’. He says, ‘Today's extraordinary global challenges require innovative, holistic responses.  CDLS brings together an incredibly diverse array of important actors in a spirit of trust and co-operation; it makes the generation of innovative, holistic responses possible. It gives me fresh hope for the future of people and planet.’