“Believe in whatever you want to believe, but allow others absolute freedom”

An interview with Rajmohan Gandhi by Diego de León Sagot 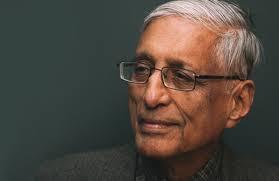 In light of the current wave of extremes and intolerance of many kinds that the world is facing, we recently had the opportunity to talk with Professor Rajmohan Gandhi after a public presentation he held in London. We asked him about his impressions on how to better deal with this troubling context, the keys to building trust and the role of Caux.

Listening to Professor Rajmohan Gandhi is a once in a lifetime experience. Not only because of the legacy he carries with him being one of Mohandas Karamchand Gandhi’s, known as Mahatma Gandhi, grandchildren, or his most renown, accurate and balanced biographer. It is also because of his own worldview and ideas about today’s world challenges.

About 350 people gathered last Thursday 20 April in London for an event convened by Initiatives of Change to listen to the 81-year old professor, who in a humble and simple way shared his perspectives about the issues affecting the UK, Europe and the world.
Listening to each other, acknowledging that no group is better, or realizing that hatred must be addressed in all circumstances were only three of many recommendations he offered during his speech. It all seemed simplistic and yet so meaningful and relevant in the context of extremes that we are living in nowadays. It is hard to believe at first sight that listening or dialoguing would be effective measures when dealing with violent extremism, war, forced displacement, polarization, exclusion, discrimination, just to mention some of the current phenomena. But these should be first steps.

“I don’t think that there can be a switch that we can turn on and we hope that these problems will be quickly solved", argued Professor Gandhi with a good dose of realism during an interview with us the day after his public intervention.

"That is not likely, he continued, but I think we should promote a culture where everyone is free to hold whatever view they want to hold, but we don’t encourage them to impose their view. A culture of tolerance, of non-coercion, of giving the other person complete freedom. If we can promote that, if we can practice that, that would be one way of countering this tendency of extremes in the world”, he stated."Hatred kills us, it doesn't kill the enemy". Professor Rajmohan Gandhi. London 20 April 2017
He also advocates for a world free of hatred. "Hatred kills us, it doesn't kill the enemy", convincingly asserted to the multifaceted audience the day before. However, during our interview he went beyond this argument, explaining that there is a necessary distinction to make between anger and hatred.

“Sometimes anger is a very necessary thing, I don’t think it should be a permanent thing, but it can be necessary when something terrible is happening”, he explained.

"We don’t want to soften the world; we don’t want a comfortable world. Yes, we want angry people to lose some of their anger; but we certainly want bitterness to go away”, he added. “Many of those who have become free of this hatred, still continue to fight for their convictions, to fight for justice, for equality”, he said.

"When we want to promote goodwill, compassion, love, forgiveness, we should remember that the justice component is also very important". People in different parts of the world or on different issues, he continued, have waited a very long time for justice. “We must recognize this reality and we must have the courage, when needed, to name an injustice. Naming an injustice is necessary to remove it”, he affirmed.

When asked about what it takes to build trust in the world, he replied emphatically:  “Listening is step number one, step number two, and step number three; we can never overdo listening to the other side, or to stories and issues, and relate them to what I am carrying in my heart”.

“If I listen to the sorrow, the pain and the longings of the world, that is the start of some kind of trust building”, he underlined.

"Caux means hope"
As a former President of Initiatives of Change International (2009-2010) and linked to Caux since 1956, we asked Professor Gandhi what Caux means to him.

“It means hope. Hope that at least some steps will be taken that will bring us closer to some solution, to some healing, to some reconciliation; not hope that everything will become perfect, but hope that the next step is being found”.

“It also means the world; generally people of all kinds gather there", he said. Every summer since more than seven decades, hundreds of people from different backgrounds, origins and walks of life gather at Caux to discuss, share and reflect on topical issues. Last year more than 1'500 participants, from more than 100 countries attended the Caux Forum.

"When I think of Caux, I also think of how it was started by ordinary Swiss people and families that came together (in 1946) and through their sacrifice created this beautiful place”, recalled Professor Gandhi.

“There is now a tradition of frankness, people listening to other points of view, everybody feels comfortable there, nobody feels threatened, people can speak out without any embarrassment, without any fear. Caux plays a very helpful role in creating this atmosphere of non-coercion but also of friendship, of good expectancy from one another”, he explained.

“Again and again in Caux, I’ve been reminded of the decisions that I made. It has always been a time of discovery about myself, of my shortcomings; but above all, Caux gives me perspective and renewal”, he concluded.

The Caux Forum, formerly called the Caux Conferences, provides a safe and privileged space to inspire, equip and connect individuals, groups and organisations from around the world to engage effectively and innovatively in the promotion of trust, ethical leadership, sustainable living and human security.

This summer, the Caux Forum seeks to develop the human potential in global change and all of its events will focus this year on addressing extremes of all kinds.