Iman Al Ghafari: Starting from the individual in Syria 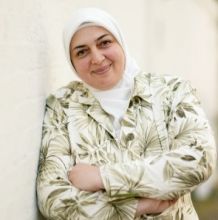 Iman Al Ghafari’s career has long been centred around building peace in Syria. She has been involved with Initiatives of Change for a number of years, leading Creators of Peace Circles in her native Syria and in Lebanon with the support of IofC Canada and IofC Lebanon. She lives in Damascus, where she works as a teacher.

Iman had thought long and hard about how IofC’s Creators of Peace programme could affect Syria. 2018 was the first time that she had been involved in the Caux Dialogue on Land and Security (CDLS). Its emphasis on the connection between peace and land restoration gave Iman new ideas.

Listening to the speakers at CDLS, she was reminded of a question that has often bothered her: ‘Why does God allow wars and natural disasters to happen?’ The answer she came to was: in order for us to search for a solution. In Iman’s view, it is through searching for solutions that we grow, learn and realize God’s great creation.

She left the Caux Dialogue filled with enthusiasm and hope, and was able to share this with the women in Syria who attended her Peace Circles. These provide a forum for women to sit together, putting their political differences aside. Participants meet as human beings and learners who want to make a difference to their own and others’ lives. They try to have fun too! At the end of each programme, Iman hosts potluck dinners with music. She says: ‘Spending time together in quiet reflection is essential. We go deep into ourselves and pour out our emotions, freely and honestly. That really makes a big difference.’

Another result of CDLS was a youth group that Iman established with some young Syrians she met at Caux. Iman believes that if young people feel secure and hopeful they can learn how to apply their education in right ways, and to be peacebuilders rather than war provokers. The group meets every month, and has grown from seven members to fourteen. At each meeting, those who were at Caux practise quiet reflection together, and all bring and exchange their education experience.

Hope is fundamental to Iman’s work. She believes that in precarious geopolitical situations hope and security can lead to passion, the will to learn and creativity.

‘It is so hard to see your country suffering,’ says Iman. ‘It breaks my heart. But it is a blessing and honour that God has given me this chance of building peace. We have two choices: either we raise hatred and anger and excite people to go to war, or we build peace. I thank God every day that I can be used to heal people, to help people to find a safe zone where they can love each other and rebuild their lives. If we start from the person and help them build themselves, we will build Syria. That is my hope.’

ILLP aims to deepen understanding of links between land degradation and human security and to build the trust needed for effective collaboration on the ground and in ‘land-peace partnerships’. As a programme of Initiatives of Change International, it inspires, equips and connects people to address world needs, starting with themselves.