Ash Domah: A passion to green the deserts 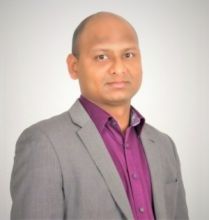 Growing up with his twin brother in Mauritius, Ash Domah spent most of his time in nature around trees and plants. His passion today is greening the deserts, and he says his visit to Caux in 2018 inspired him to give all his time to this.

Ash moved the UK to study when he was 20, qualified as a chartered account in 2005, and then at the age of 36 embarked on an MBA at the Bradford University School of Management. While studying a module on Ethics & Sustainability, he saw how businesses over-exploit resources to maximize profits and create shareholder wealth, at the cost of the planet and its people.

In 2010, Ash became Controller for multinational US-listed Tech companies from the Silicon Valley. In 2017 he was introduced to the United Nations Sustainable Development Goals (SDGs) and participated in the first ever technological fair of the United Nations Convention to Combat Desertification (UNCCD), in Ordos, China.

The same year he founded Tradom, a start-up company inspired by the SDGs. It aims to spur a new Green Revolution to feed one billion people, while increasing forest cover and protecting wildlife. Over the next 12 months he set up private-public partnership agreements with NGOs, private-sector players and government agencies. The projects with NGOs include an 100,000 hectare Agro-Forestry programme; a jatropha plantation for biodiesel, an alternative to fossil fuel; a partnership in North Africa to stimulate socio-economic development; a bid to expand Arundo Donax biomass (known as Green Coal) internationally; and strategic partnerships with one of China’s largest environmental and ecological companies and with UNCCD.

In July 2018, he was invited to the Caux Dialogue on Land and Security (CDLS) and its Policy Makers’ Round Table. These gave him a chance to learn more about the relationship between land and ecosystem restoration and conflict resolution, community building and sustainable finance. He was inspired by his interactions with others working in the field and developed new collaborative partnerships.

After leaving Caux, Ash decided to resign from his corporate job and dedicate all his time to implementing large-scale land restoration projects with Bremley Lyngdoh, who had invited him to Caux. They are collaborating on EcoRestoration projects developed with Worldview Impact. They are also working with the Government of Meghalaya, and partners from Germany, South Africa and Australia, on a project to restore 5,000 ha of rat-hole mines, which have contaminated air, water and land. And they have started collaborating with the Natural Capital Alliance – an initiative by CDLS participants to empower the regenerative economy through peer-review of blockchain projects, with the aim of building a trusted global marketplace.

Ash believes that charity is not sustainable but that addressing climate change with small and marginal farmers is a business opportunity. So he is developing sustainable business models. Climate change cannot be mitigated without addressing poverty, he believes: the poorest people, those least responsible, are – and will be – the hardest hit.

‘Caux has been an inspiring place to be,’ says Ash. ‘It led me to retire from the corporate world to pursue my new-found life purpose of greening deserts.’

His technologies can be viewed here.