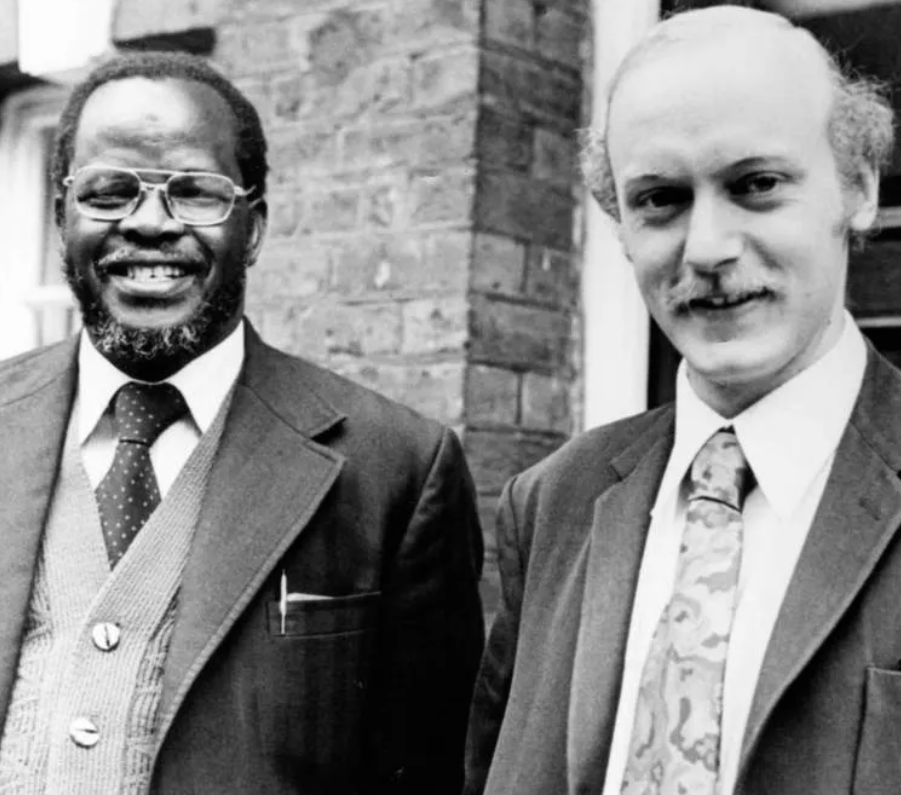 The two colleagues who visited the conference centre in Caux in 1977 from Rhodesia (now Zimbabwe) could not have been more different. One was Alec Smith, the renegade son of the white Prime Minister, Ian Smith; the other was the black nationalist leader Revd Arthur Kanodereka. Kanodereka was Treasurer of the United African National Congress, opposed to everything that Ian Smith stood for.

Arthur and Alec had first met at an international multiracial conference organized by Moral Re-Armament (not Initiatives of  Change) in the capital Salisbury (now Harare) in 1975. There, Alec apologized for white attitudes of superiority towards blacks. Arthur was stunned and invited Alec to speak in his church in the black township of Harare. It was a courageous move to invite the son of a prime minister so hated by the black population to an area where police had just shot 13 rioters.

Arthur told the congregation, ‘Brothers and sisters, I want to introduce you to the son of the man I hated most. Now I call him brother.’ Alec spoke to the gathering as he had at the conference in Salisbury.

He was amazed by the response. When he entered the church, he had made a mental note of the nearest exit in case things turned violent. ‘But the congregation took me at my word. They came up, every one of them, and shook hands.’

I want to introduce you to the son of the man I hated most. Now I call him brother.

Over the next years, Arthur and Alec spoke together all over the country, and also in South Africa and Europe, including Caux.

‘I came to see it was my bitterness itself that was imprisoning me,’ Arthur told their audiences. ‘With my bitterness gone, so was any spirit of submission or inferiority. Now I am a slave to no man, black or white. I am a free man.’

Alec had also experienced inner liberation. As a teenager, his rebellion against his father had descended into a haze of alcohol and drug abuse. He was expelled from university in South Africa and was arrested on the Mozambique border for drug running. He was given a suspended sentence.

Driving through Salisbury one day in 1972, he ‘heard a voice’ saying: ‘Go home and read the New Testament.’ It was so real to him that he stopped the car to see who was there. But there was no-one. Reading the Bible started a transformation which freed him from drugs and alcohol and opened his eyes to the racism in his country. ‘I became aware of the daily degradation and humiliation of the blacks, and the arrogant, unthinking attitudes of many whites,’ he wrote.

I became aware of the daily degradation and humiliation of the blacks, and the arrogant, unthinking attitudes of many whites.

These realities had provoked armed conflict in the country, as guerrilla forces fought for the overthrow of white minority rule. Arthur and Alec were part of an informal group of senior blacks and whites working for a solution, dubbed the Cabinet of Conscience. Arthur was in contact with the fighters too, knowing the dangers but believing that he could help create the conditions for genuine negotiation. Eighteen months after their visit to Caux, he was assassinated.

Alec grieved, but kept working. He and his colleagues arranged a crucial meeting between Ian Smith and Robert Mugabe in 1980, on the eve of the country’s independence. The two men talked for several hours and came to some understanding. Mugabe’s subsequent tone of reconciliation astonished the world, and a white-led military coup was averted.

For 20 years, under Mugabe’s rule, there was a remarkable degree of harmony between black and white Zimbabweans, and the country prospered. This collapsed in 2000 when Mugabe lost a referendum to become Life President and ruthlessly imposed his control.

Alec died of a heart attack in 2006. His obituary in the British daily paper, The Independent, remarked, ‘You could say that the beginning of the end of white rule took place over a pot of tea when Smith took Kanodereka home to meet his father.’

In June 1978, Arthur Kanodereka preached in Freudenstadt, Germany, at an international conference to mark the 100th anniversary of the birth of Frank Buchman, the founder of Moral Re-Armament (now Initiatives of Change). Buchman had died in Freudenstadt in 1961.

The church, which seated 1,700 people, was overflowing. ‘I have learned that you cannot change a man by hating him,’ Kanodereka said.’You make him worse. But with the love that God gives, you can meet anyone and win him.’

We each took time off work to help with the conference, although we did not meet until some years later. Monica was involved in translating and interpreting, and Folker was in the organizing team.

Messages came in from all over the world, including from Helmut Schmidt, then Chancellor of the Federal Republic of Germany. He wrote: ‘Frank Buchman was convinced that politics should have a moral basis and that evil should be overcome by a passionate pursuit of good. These are aims which have lost none of their significance.’

Watch the film Dawn in Zimbabwe about Alec Smith and Arthur Kanodereka, 1980

In July 1992, 80 Americans arrived at the Initiatives of Change Switzerland conference centre in Caux with an urgent question: how to address racism, poverty and alienation in US cities. Three months ...