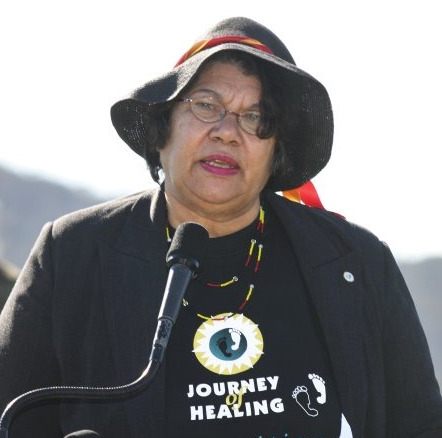 When Ningali Cullen came to Caux in 1998, she brought news of a growing people’s movement in Australia to acknowledge the truth about their history.

Ningali was removed from her family at the age of four under government policies aimed at assimilating Aboriginal people into the white Australian community. ‘I was raised on a mission,’ she said. ‘I trained as a nurse, and did all the things accepted by a society which wanted us different from what we were born – Aboriginal. For years I didn’t know where I belonged.’

At the age of 28 she found her mother. But soon after, her mother, treated with racial hostility in an Australian country town, wandered off into the desert and was never seen again. For Ningali, the trauma began again.

Tens of thousands of Aboriginal children were removed, some as recently as the 1970s. Most white Australians saw the policy as well-intentioned and benign. Then in 1997 an inquiry into the removal policies exposed the tragic outcomes.

‘Hearing the stories of 500 Aboriginal people has changed me,’ said the chair of the inquiry, Sir Ronald Wilson, ‘and if it can change me, it can change Australia.’ He called for a Sorry Day, to apologize to the Aboriginal community. The Government rejected the proposal.

However, as Ningali said at Caux, ‘Twelve months after the release of the report a national Sorry Day was held in Australia. And I’m pleased to say it was people-initiated.’ The Government’s refusal to apologize had spurred a million Australians into action, and hundreds of community events brought Aboriginal and white Australians together in sorrow, apology and a commitment to build a new relationship.

‘The national Sorry Day was the final thing in my healing, because it gave recognition to the pain,’ Ningali said. ‘It gave us permission to grieve together. Talking, listening, sharing together – that’s my vision for Australia.’

It gave us permission to grieve together. Talking, listening, sharing together – that’s my vision for Australia.

On her return home from Caux, Ningali met with Stolen Generations representatives from across Australia, and urged that they seize the moment to heal the wounds caused by the separation policies. Many agreed with her, and soon the Stolen Generations invited the people of Australia to join a Journey of Healing and take on the work of healing which the Government ignored.

Throughout the following 10 years many thousands of people worked for healing in a myriad of practical ways. In 1999 Ningali was elected to chair the Journey of Healing, and gave forthright leadership in a campaign which, by enlisting people across the political spectrum, won respect even among many government MPs.

In 2007 the Australian Government was defeated in national elections and the new Prime Minister, Kevin Rudd, announced that he would make the apology. ‘Will the Opposition join me?’ he asked. After heated debate the party – which for 11 years had opposed an apology – changed their policy.

The unanimous parliamentary apology was a profoundly moving event for Australia, watched by millions throughout the country. It enabled several billion dollars to go into transforming the social condition of Aboriginal Australia.

When Kevin Rudd visited Caux in 2012, he spoke of the ‘critical preparatory’ community groundwork of Sorry Day and the Journey of Healing at a time when the political obstacles seemed insurmountable. ‘That foundation was necessary for it to catch fire with the community at large.’ Much credit for that work must go to Ningali Cullen.

This story is told in greater detail in ‘Sorry and Beyond: Healing the Stolen Generations’ by Brian Butler and John Bond, published this year by the Institute for Aboriginal and Torres Strait Islander Studies, Canberra, with a foreword by Kevin Rudd. It is also available worldwide as an electronic book.

Watch Kevin Rudd speaking in Caux in 2013: The Australian Apology: The Process of Healing