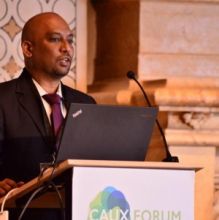 After serving in the Indian Air Force for 13 years, Sai Kishore Nellore decided to work on climate change while studying for a MBA in Aberystwyth, Wales. He realized that the people most affected by climate change are small and marginal farmers, who get limited support from such affirmative actions as the Clean Development Mechanism (CDM), which enables projects in developing countries to earn Certified Emission Reduction units (CERs), which can then be sold, mainly to developed nations.

Sai's research in the UK led him to Bremley Lyngdoh, Founder and CEO of Worldview Impact. They discussed the issue of small and fractured land holdings and on his return to India, Sai started working with VEDA Climate Change Solutions (VCCSL), an enviro-social enterprise working with small and marginal farmers. He completed the validation and verification of its Improving Rural Livelihoods project, which has now been implemented in partnership with the BioCarbon Fund of the World Bank and JK Paper Mills.

This was the first project of its kind in Asia. It has benefited some 1,600 small and marginal farmers in six poor districts of Andhra Pradesh and Odisha and afforested or reafforested 1,607 hectares of degraded land. The farmers sold 80,000 CERs to the World Bank for $4.05 per ton of CO2. During the project’s lifetime, each farmer will get about $300 per ha and also make about $3000 per ha by selling pulp wood to the local paper industry.

Sai strongly believes that farmers are not just beneficiaries but providers and stewards of the ecosystem services on which we all depend. He has been working on developing unusual business models to benefit farmers and is exploring the convergence of payment for ecosystem services, blockchain and fintech in a doctorate with the International Open University Foundation.

He has worked with UNDP, the Government of Bhutan, and the corporate sector to develop and manage projects related to land restoration and climate change. He and Bremley have conceptualized a project to develop a new Ecosystem Services Assessment and Valuation Standard that uses such technologies as blockchain and drones for monitoring and verification.

Sai took part in the Caux Dialogue on Land and Security (CDLS) in 2018. It offered a platform to interact with others working in this domain and to develop collaborative partnerships. Sai and Bremley have started collaborating with Natural Capital Alliance – an initiative by CDLS participants to empower the regenerative economy through peer-review of blockchain projects on regeneration, with the aim of building a trusted global marketplace.

Sai also participated in the Policy Markers Round Table at Caux. He realized CDLS's immense potential, was inspired by its energy and has committed himself to target land restoration at scale and replicate his successful Indian project.

Since leaving Caux, he and Bremley have identified 5000 ha of degraded mountain ecosystems in the Aruka region of the Eastern Ghats in Andhra Pradesh for a project that will benefit more than 4,000 households. Once implemented, it will be replicated for the whole of the Eastern Ghats, an area of over 50,000 in Odisha, Andhra Pradesh and Tamil Nadu. They are also developing collaborative partnerships to address livelihood issues over nearly 50,000 ha in Assam, and working in 400 villages in Meghalaya to contribute in community-led landscape management initiatives. The latter are a direct outcome of CDLS.