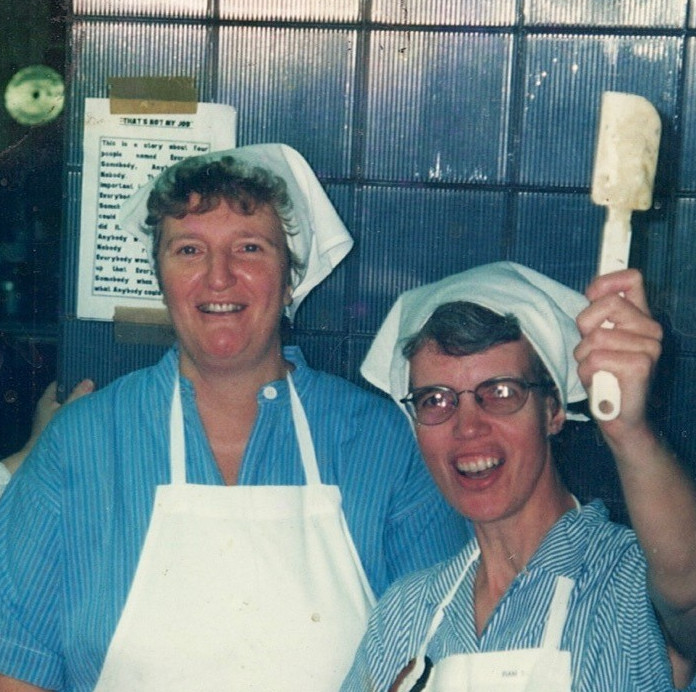 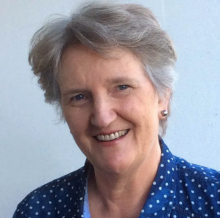 Cooking for hundreds of people takes skill and courage at the best of times – and all the more so when your team speaks several languages and includes people who have rarely cooked before.

For most of the Caux conference centre’s existence, the meals have been cooked by conference participants, led by intrepid and experienced head cooks, who came from all over the world. These women – and some men – were volunteers, who left jobs and other commitments to spend summer after summer at Caux. Three of them ⎼ Alison Wetterfors, Debora Kupferschmidt and Liz Weeks ⎼ appear in the photo above.

Alison Wetterfors, a gifted Scottish singer who took part in a number of Moral Re-Armament (now Initiatives of Change) productions, was one of them. She writes:

I am of course totally biased, but there is no doubt in my mind that by far the best place to take part in the volunteer work at Caux was the kitchen. I worked there in the summer for over 25 years in the 70s, 80s and 90s, many of them as a head cook.

To come to the kitchen after an intense plenary meeting was the perfect contrast, and many friendships were made and discussions had as one stirred the soup or fried the fish. It gave the perfect chance to translate theories about a better world into practice.

Many friendships were made and discussions had as one stirred the soup or fried the fish. It gave the perfect chance to translate theories about a better world into practice.

Many memories come to mind. The conversation between a British navy commander and an Argentinian shortly after the Falklands war, as they mashed the potatoes. The animated discussion between two Russian journalists as numerous omelettes were made, and the quiet to and fro between a retired ambassador and an African businessman as they chopped piles of parsley at a very slow pace. The challenge and fun of working with 10 or 15 other people to produce a meal for 500 was both satisfying and creative.

These moments were far outweighed by the achievements of a group of people, a good number of whom had never in their lives worked together with others to produce a meal for such numbers.

And then there were the times when it could be a little too exciting! The large amount of whipped cream left a moment too long in the mixer transformed in a flash into butter. The swoosh of many litres of egg mixture disappearing down a drain as someone lost control of a machine – and the sinking feeling that accompanied it. The frantic search for the tip of a large knife lost in ice cream for several hundred people – it was found!

These moments were far outweighed by the achievements of a group of people, a good number of whom had never in their lives worked together with others to produce a meal for such numbers.

No account of the kitchen operation would be complete without mentioning the Economat and vegetable teams. The former ordered all the food, and with their considerable expertise and support kept the whole show on the road. The vegetable team, starting very early, cut, chopped, peeled and washed, filling baskets full of salad, broccoli, or whatever else was on the menu that day. It goes without saying how important these teams were for the kitchen.

And so finally, in case you are wondering, we come to a certain skeleton. The discovery that the theatre was using one in a play was irresistible! It was duly ‘borrowed’ one evening, and, clad in a cook’s apron with parsley in its teeth, was draped over the largest soup pot in the hope of giving the night watch or any other passer-by a fright.

History doesn’t recall the effect it had in the midnight hours, but it had to be removed very quickly the next morning, as a group of Asian diplomats from Geneva toured the kitchen.

I still wonder what their reactions would have been to the contents of the soup in Caux if they had come round the corner a moment sooner!