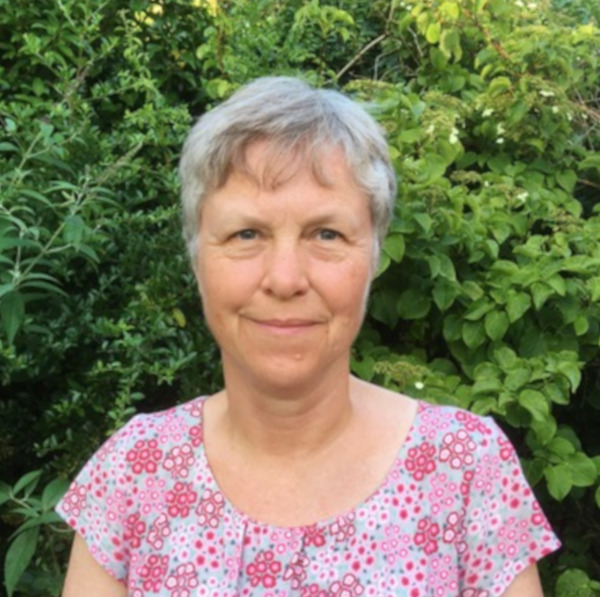 In July 1980, a one-man show about St Francis, Un Soleil en Pleine Nuit, premiered in Caux. It starred French mime artist Michel Orphelin, and was written by British playwright Hugh Steadman Williams, with music by Kathleen Johnson, also British. Michel Orphelin presented the play – in its French or English version (Poor Man, Rich Man) – in many countries over the next decade.

Su Riddell left her job as a secretary in Paris to join the backstage team as Assistant Stage Manager, aged 21, in June 1980. She toured with the play in Europe and North America for the next three years. These extracts from her letters to her parents describe the start of the adventure.

We were six in the minibus leaving Paris, including Michel Orphelin, French actor, singer and mime artist; Annie (French) who will project the backdrop slides; François, Michel’s son who will be on sound; and Peter, British pianist.

It was a lovely sunny day. We stopped for morning coffee, then a picnic in a field once we’d turned off the motorway, more coffee by a fierce and swollen river, then through the rugged and wild Jura, and lovely mellow old towns, to the Swiss border. Driving along by Lac Léman, we could see Caux from afar, but the mountains were hidden in mist.

As soon as we arrived, we met the rest of our team: Claude, French, taking on the show’s administration; and Gunnar and Christian, Swedish technicians. We are rather international for a French show.

We are rather international for a French show.

I’ll tell you about the first show. We all had dinner together but were rather subdued (that means normal compared to other people at Caux). We had a meeting first, backstage, said a prayer, then went to our places. The audience flooded in, I let the orchestra out (men in dinner suits, Kathleen in a long dress) and off we went. I made myself calm down and all went fine, point of view audience.

In fact we’d all made mistakes. Mine are rarely visible, but are a question of timing. The audience doesn’t know what is meant to happen, but we all do and especially me.

I only totalled three or four bad cues, and John D, the director, was very pleased. I enjoyed my ‘world première’. Oh, but then….

Marketta had laid out a cold meal, lots of fizzy drinks, and coffee, so we all sat in the kitchen at a long table (flowers and all). Surrounded by pots and pans and huge steel ovens. Michel, on entering, had a standing ovation.

When eventually we’d finished eating, a piano was dragged in (right into the kitchen) and we had a sing-song, and played games (there were 14 of us.) At about 1:30am the party split up, we got the kitchen back to its usual impeccable-ness and went to bed. It was terrific.

Meanwhile, I’m finding out how little I know about faith, and just seeing how long the road is I have to travel. I’m afraid I may start enthusiastic, and get tired soon. I hope that by keeping things in a worldwide perspective I can balance the personal perspective.

I hope that by keeping things in a worldwide perspective I can balance the personal perspective.

This is all terribly easy here at Caux. Back in Paris, back to city life and my friends, it will be all too easy to forget, to lose sight of the goal, to lose a sense of the importance of God’s work. Mountains are inspiring places. Please, can you help me remember? I know God will keep me heading the right way, but I’m so afraid of losing the joy, the freshness, the peace, I have found here.

In the summer of 1983, when the play’s initial tour came to an end, the cast was back in Caux. Su wrote:

Un Soleil en Pleine Nuit has meant a new start in life for me. I’ve given my life to God, and he knows what I need, he knows more about me than I do. He has a plan for the world too, and I want to be part of that. So day by day I’ll go wherever he leads me.

1994: The Caux Round Table – Principles for Business

In July 1994, a set of Principles for Business was launched at Caux by the Caux Round Table (CRT), an international forum of business leaders which had been meeting there since 1986....

The Algerian diplomat Mohamed Sahnoun was President of Initiatives of Change International from 2006 to 2009 and founded the annual Human Security Forum at Caux....

Zeke Reich is a psychotherapist at a community mental health clinic in Washington DC who has been to the IofC conference centre in Caux several times over the years. He remembers an encounter which ha...

‘There are two people in the Somali delegation whose names include Omar,’ said the man from the allocation team at the Initiatives of Change conference centre in Caux. ‘As we didn’t have any informati...

Before you arrive in your room in Caux, someone from the housekeeping team will have been there before you, to check that it is clean, that the bed is made up and the light bulbs work. If you can’t wo...

Between 2003 and 2013, Caux was the scene of seven political dialogues between deeply divided Burundian leaders. They brought together representatives of political parties and armed rebel movements, f...

The archives of the Caux Conference and Seminar Centre, now held by the Canton of Vaud, are an endless source of precious information. Swiss archivist Eliane Stallybrass describes the work to preserve...

'I first met Cornelio Sommaruga at a private dinner party. He was then head of the International Committee of the Red Cross (ICRC) and was just back from Cuba, where he’d met with Fidel Castro, in the...

Around the turn of the Millennium, many young Ukrainians came to Caux. Some of them took leadership in Foundations for Freedom (F4F), a programme for young people which offered courses in the values w...

It was a Red-Letter Day in July 1999 when more than 40 young Latin Americans burst through the front door of Mountain House, Caux, and hugged everyone in sight. Gente Que Avanza had arrived – and Caux...

When Ningali Cullen came to Caux in 1998, she brought news of a growing people’s movement in Australia to acknowledge the truth about their history. ...