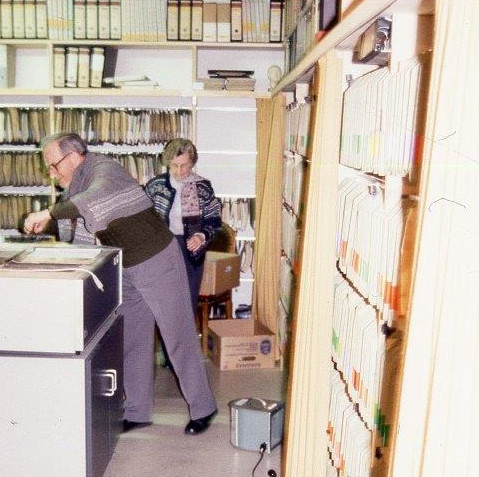 The archives of the Caux Conference and Seminar Centre, now held by the Canton of Vaud, are an endless source of precious information. Swiss archivist Eliane Stallybrass describes the work to preserve Caux’s history for the future, which began with the determination of one woman.

Erika Utzinger (photo top in the light-green pullover) did not make much noise. She probably never spoke from the platform in the Caux Palace, but her work has put the Caux Conference and Seminar Centre on the map for generations to come.

As a full-time worker with Moral Re-Armament (now Initiatives of Change/IofC), she did secretarial work for several people (men!) for many years. She saw all the documents they were handling and was convinced they should not be lost.

In 1961 she started collecting every written document she could lay her hands on: letters, reports, newspapers….

She found a place in the third floor corridor of the Caux Palace, next to the offices, to store these documents. Serge Borel from Switzerland helped her by constructing shelves and a system of hanging files, which she labelled. She started to put every paper in the right place, by year, by subject, by person. It was a huge job. She took a course in dealing with archives. Patiently, year after year, she collected everything that was lying around, creating an extraordinary fund of international material.

She did not make much noise. But her work has put the Caux Conference and Seminar Centre on the map for generations to come.

It was not always easy for her. People could not understand why she was doing it. It seemed more important to deal with the present than the past. But when they needed a document, many just marched into the archives and helped themselves, much to Erika’s despair.

In 1997, I left full-time work with IofC and looked for a job. It was hard. But the archivist of the city of Geneva, Micheline Tripet, who had worked with Moral Re-Armament in its early days in Caux, helped me to find a job sorting papers for a well-known Geneva family.

At the beginning I was not too excited. Archives were old papers in a stuffy place! But I discovered how fascinating it could be. One of IofC’s pioneers in Switzerland, Daniel Mottu, also asked me to deal with his papers.

So I got curious about the Caux archives and visited the place where Erika was working so diligently. She hoped I would take over from her. I had to disappoint her. Then Micheline came up with the suggestion that we could give our archives to the Vaud Cantonal Archives (ACV). We had had no clue that that was a possibility.

At the beginning I was not too excited. Archives were old papers in a stuffy place! But I discovered how fascinating it could be.

We invited the director of the ACV, Gilbert Coutaz, to Caux. He looked at the metres of hanging files, and said he would take the lot. So Erika and I spent two years indexing all the documents according to the ACV’s rules and finally gave the first 160 linear metres to the Vaud Archives in 2002.

A wonderful event took place with local authorities present and Erika was duly thanked. Gilbert Coutaz said, ‘Moral Re-Armament is returning to Vaud soil.’ Cornelio Sommaruga, who as President of the Swiss Initiatives of Change Foundation at that time had supported the project, welcomed it as evidence of IofC’s willingness to be open and transparent.

We have now reached 200 metres, and there is more to go. When Gilbert Coutaz discovered that we had films, recordings of meetings, the words and music of 548 songs, and so much more, he encouraged us to give everything. Now I am dealing with the photos which is a headache sometimes, as many carry no details of who is in them, when they were taken and by whom!

We are already seeing the fruit of this work. Several students have done research on Moral Re-Armament in the Vaud Archives. The latest is Cyril Michaud, who has just completed his doctoral thesis on ‘Moral Re-Armament on Swiss soil. From 1932 to 1969’. This is the first of two theses financed by the Swiss Federal Fund for Scientific Research. The second, by Audrey Bonvin, covers the period from 1970 onwards and will be presented in a few weeks’ time.

Initiatives of Change and the Caux Conference and Seminar Centre are truly becoming part of history.