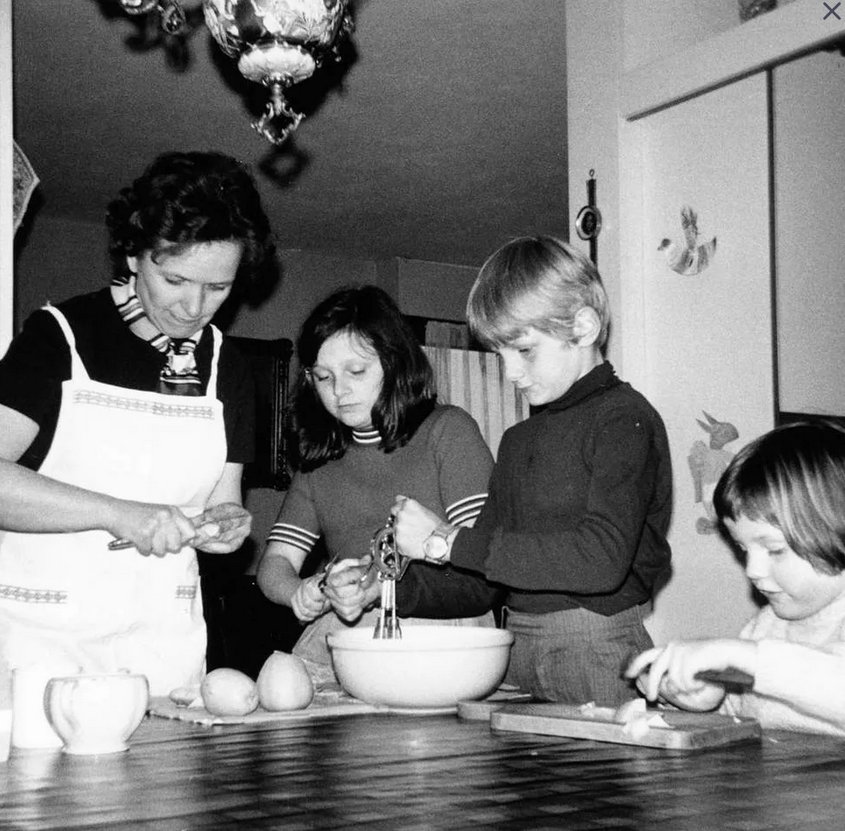 Amie Zysset from Switzerland was the heart and soul of the international family conferences which took place in Caux from 1978 through the 1980s. She died – aged only 60 – after many months in hospital, on the last day of the 1984 conference. ‘If I die before the family conference, I will watch over you from above,’ she had announced.

During her training to be a domestic science teacher, at the end of the 1940s, Amie had stayed in a boarding house for young women called ‘La Grande Aventure’ (the great adventure) in Lausanne. Its director, Frida Nef, had been involved in the creation of the Caux conference centre and shared her enthusiasm for the place with her residents. This is how Amie discovered her vocation.

It began with learning Swiss German in a Bernese family. The Flütsch family had four children and the mother was sometimes away with her husband on missions with Moral Re-Armament (MRA/later Initiatives of Change).

They spent every summer in Caux and took Amie and the children with them. She got involved in the life of the conference centre, at first helping with the cooking, as was only natural with her training.

But two passions were to develop and give her other avenues of activity.

Amie had a huge interest in the development and wellbeing of children. In 1969, there were many families in Caux. Amie decided to take charge of the 7- to 12-year-olds, while Monika Flütsch (now Bodmer), whom she had taken care of 14 years earlier, created the kindergarten in the Grand Hotel in Caux.

On more than one occasion, we and our children have benefited from this disinterested outside help that so many families lack today.

Amie knew how to listen to children and, alongside games, cooking and other activities, offered them  discussions on themes that were important to them, such as getting along with their brothers and sisters, family life and even divisions between their parents. These discussions led to the creation of a small newspaper, where the children could express their thoughts and thus help other children.

Amie was not a typist, had no journalistic training and knew nothing about publishing, but she had the gift of using her limitations to develop the talents of others. So Elephant and Mouse was born, published in French and German, full of questions, reflections, personal stories, games and drawings. It came out every two months, and the adventure lasted 15 years. The print run reached 400 copies.

She was also concerned about the parents and, as Jean-Jacques Odier wrote, would sometimes take them aside with a word of advice. ‘On more than one occasion, we and our children have benefited from this disinterested outside help that so many families lack today.’

One Christmas, Amie and Monika staged the MRA pantomime Give a Dog a Bone in Caux with a cast only of children.

Her other passion was the life and future of her region, the Jura, where tensions between Catholics and Protestants had turned violent. As a citizen from the small town of Reconvilier, she counted among her friends many of those involved in the region’s political and social problems. The photo at the top shows Amie (on the right) with Debora Kupferschmidt, a Swiss German-speaking friend from 'the other side' of the local conflict.

She invited friends from divided communities in Canada and Ireland, and from Papua New Guinea, to visit the region and share their experiences of reconciliation. She also took friends from the Jura to other countries. During a trip to India, she and a friend found themselves sitting next to Mother Teresa on the plane!

She had the gift of using her limitations to develop the talents of others.

Sadly, it was in India that she contracted a disease which was never fully diagnosed and which took her life. She often wrote personalized poems, as gifts for her friends. Many of them were published in a small book after her death.

As we work on these stories of people round the 75th anniversary of the Caux conference centre, we’re struck by the number of relatively unheralded women – like Amie Zysset – who are entirely worthy of appearing here. The great adventure of Caux would not have been possible without this shadow army working in so many areas of the Caux conference centre and the work of Initiatives of Change in general, giving time and money, creativity and care.

Watch a 1965 production of the play Give a Dog a Bone.